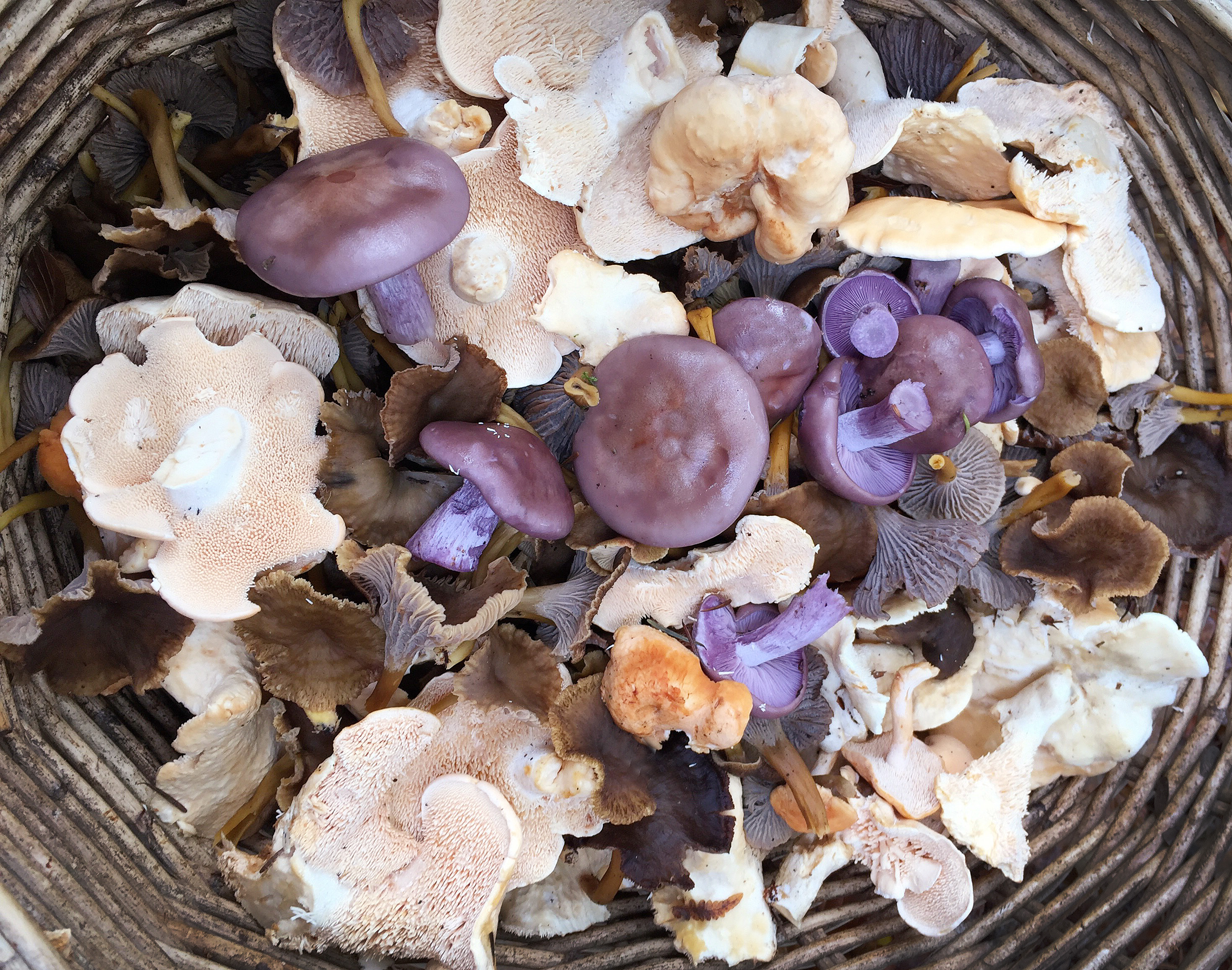 John has very kindly invited me to contribute a guest blog. I am a fellow foraging guide who is based in Mid-Wales. Almost all of my forays are in the vast conifer plantations scattered along the Cambrian Mountains. I am lucky in that no one seems to want to restrict mushroom picking here. This is entirely sensible. The local forestry managers appreciate that harvesting the fruiting bodies we know as mushrooms,  has no impact on future crops appearing. Also, there is effectively no competition for something which most people regard as ‘toadstools’. And finally, as these plantations will shortly be cut down, clear-felled to produce timber, this will totally destroy the buried mycelia, the organisms which produce the fruiting bodies.

Things are not so relaxed elsewhere in the country. In many places the authorities seem to have an instinctive urge to restrict or even ban foraging. They claim that Eastern European gangs are stripping the woods bare to sell mushrooms to posh London restaurants. And that they are threatening delicate eco-systems and the fungal futures of our precious oldest woodlands – all motivated by naked greed. To push their message home, they have produced thousands of warning signs telling the public they can look but not pick. Any infringements will be met with prosecution. 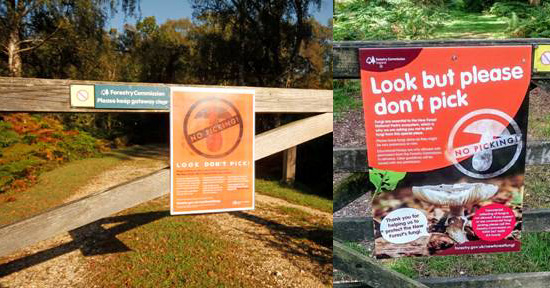 Fortunately this is all completely untrue, in law and in science. Firstly the right to forage is rooted in the 801 year-old Charter of the Forest. Although this has been amended over the centuries, its basic principles remain. To summarise these crudely, they give the public the right to pick the four ‘fs’ (fruit, foliage, flowers and fungi) in places where they are entitled to be – such as on footpaths, in parks . . . in other words any area open to the public. This cannot be changed by the land manager. Nor can it be amended with a by-law or by labelling an area as a SSSI or Nature Reserve. Indeed the 1968 Theft Act specifically says that picking for personal consumption cannot be theft. The New Forest authorities tried to enforce a complete ban on mushroom picking in 2016, but were eventually forced to concede they had no legal right to do this.

Some land managers in the UK have also taken this to mean that picking commercially actually is illegal, but this is false logic.  As far as the law is concerned, commercial harvesting of wild food is something of a grey area. In fact the only three cases I can find where someone was blatantly picking commercially (and two were on private property) were all lost by the land owners.

Also, the suggestion that commercial mushroom picking is ‘rife’ is laughable. Tesco is currently buying in top quality chanterelles, horn of plenty and hedgehog fungi from Russia for £6 per kg. These retail in the aisles at £20. This is the competition the alleged “New Forest gangs” are up against. It would take many hours to gather, say, 100kgs of such mushrooms. These would have to be graded (with up to 50% jettisoned as poor quality); paperwork filled out; then they would have to be transported in a 200-mile round trip to a New Covent Garden wholesaler – who would only buy from a reputable seller with proper insurance. The figures just don’t make any sense, but even if they did, we live in an age of mobile phones with cameras, microphones and even video. Where is the evidence of these gangs? 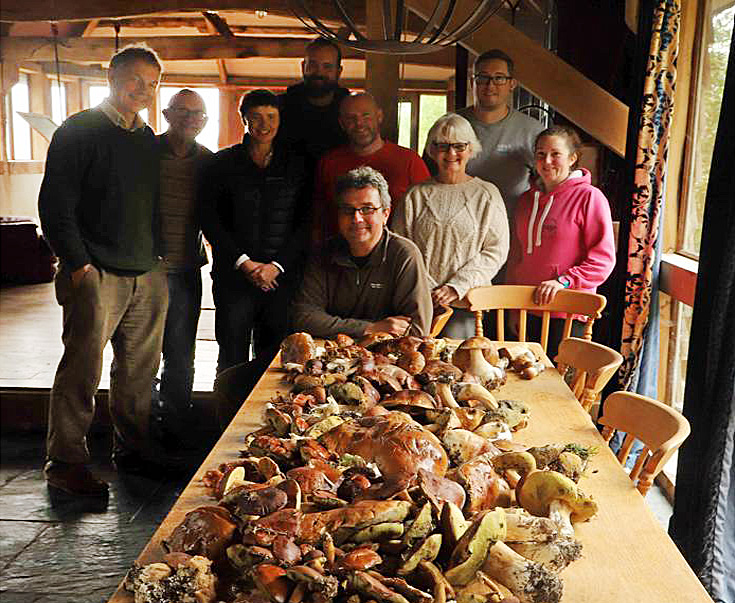 Picking in quantity is cited as evidence of ‘commercial’ activity but actually, like hedgerow fruit, mushrooms dry brilliantly and traditionally have been preserved.

When it comes to the science, the reality is that a mushroom is simply a fruit like an apple or blackberry. The British public would laugh at the suggestion that members of the WI picking a basket of hedgerow berries to make jams and jellies to sell for good causes, were in fact threatening the future of our crab apples or brambles – let alone think consider that because they picked large quantities, this was evidence of ‘commercial’ harvesting. 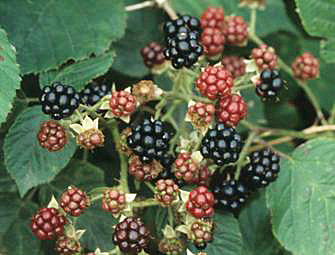 Is picking apples or blackberries harmful?

When it comes to mushrooms, however, as a nation we bask in fungal ignorance. Unlike our Continental neighbours who love nothing more than to rush into the woods to revel in the fantastic colours, scents and tastes of autumn, we regard all fungi as potentially deadly toadstools. Indeed, many people delight in kicking them over to protect their children and pets. Our woodland managers really are missing a trick here. Most are charged with encouraging the public’s appreciation of the natural world. Fungi foraging is a fantastic opportunity to learn about the third great natural ‘kingdom’ (plants and animals being the first two). And this is particularly true when it comes to children. We berate obesity in our young and their increasing addiction to screens but a trip to the woods is the perfect answer to both – and most children love the hunt, not least because they are generally better mushroom hunters than their parents thanks to better eyesight and being more prepared to duck into the undergrowth.

This autumn’s mushroom season is all but over here in Wales, but as I’ve just discovered, things are taking off in southern Britain. I had a fantastic time a few days ago when I went on a busman’s holiday – paying for a guided fungal foray in the New Forest. Having met up with a lot of really wonderful fellow foraging guides and teachers from all over the country, my dog and I accidentally ended up filling a half page in
The Times (26 October – p.11). 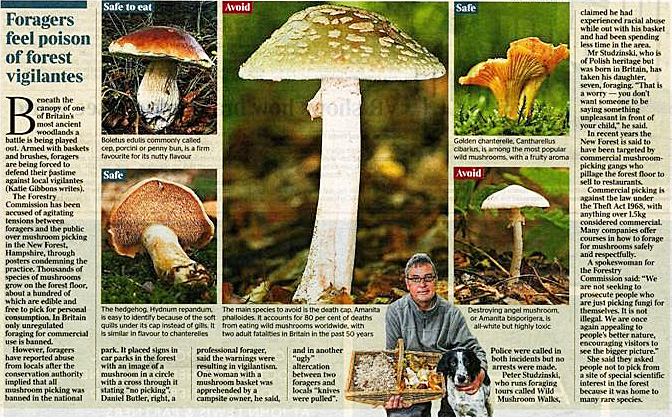 I am currently working on next year’s foray dates, but basically they are every Saturday and Sunday from 14 September until 20 October and the price will be the same as this year (£70 per person).