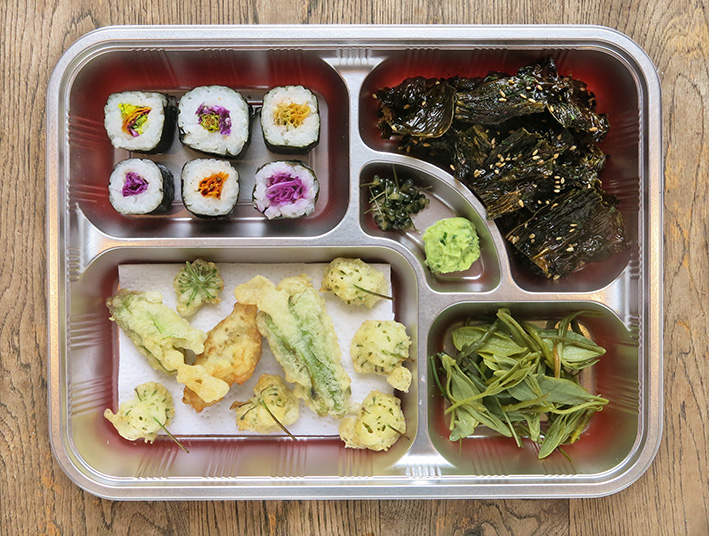 It’s more commonly a plant, a recipe or some historical information that inspires me in the kitchen…In this case it was quite simply the packaging, not that I can exactly remember where this plastic tray came from or what was in it to start with. Last month I wrote about my trip to Scotland, something of a “forager’s summit” and how this had not only inspired me but made me want to up my game. Essentially, I’m a pretty lazy cook and often choose the most direct path from picking to eating, especially when dealing with ingredient that taste so fantastic, they need very little interfering with. If the Scotland trip taught me anything, it’s that wild food can be elevated to the highest culinary levels without needing to visit a famous or fancy restaurant…it’s all there just waiting for us, the flavours, colours and textures have already been created, all it needs is some simple cooking and some careful presentation. So, here it is, my foraged Bento Box; all the main ingredients are wild except the sushi rice and the tempura batter…I’m not a total purist but I’m sure I could have found native, foraged alternatives if I’d had the time or inclination. Below are all the simple recipes I’ve used, copied or invented….from top left, Wild Flower Futomaki rolls wrapped in Nori Seaweed, Deep fried Sugar Kelp Crisps with Furikake sprinkles, Wild Garlic Capers and Wild Rocket Wasabi, Hog Weed Tempura and Salt Marsh Plants pickled in rice wine vinegar. The pickles and capers were already prepared but had taken literally a minute each to make and the entire meal, including photographing it, took just over an hour, the real time consumer was the foraging and some degree of food prep beforehand, but if you’re anything like me, that’s an absolute pleasure, not a chore. So, here are the recipes, use them only as vague guide lines, allow your curiosity and your ego to take you off at tangents and I hope this inspires you to ignore all that parental advise, and play with your food, as much as possible. 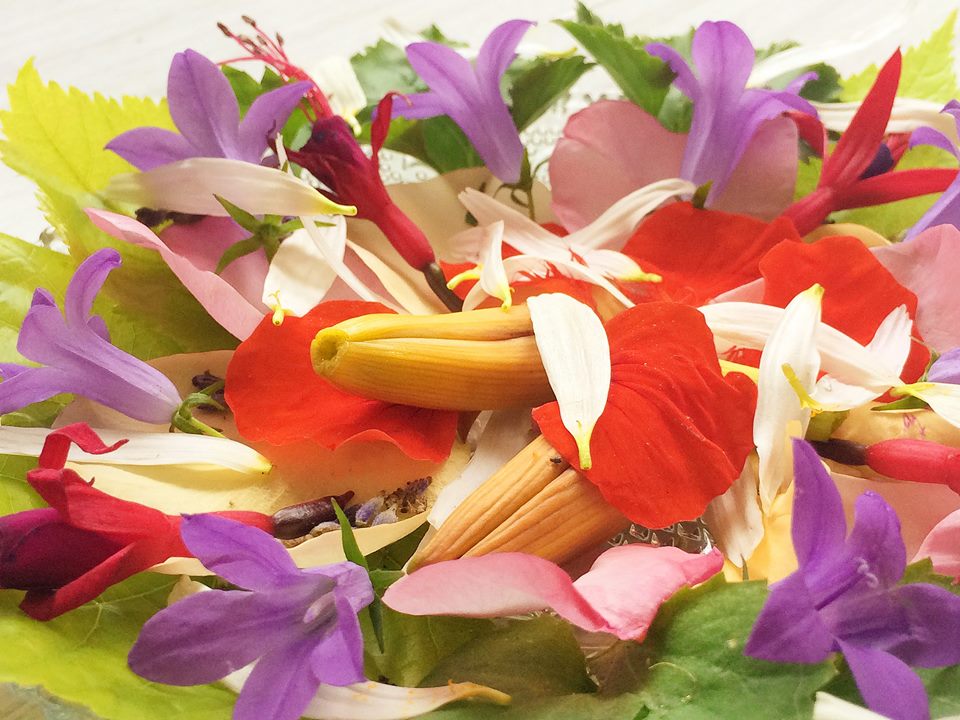 We love eating seaweeds with Japanese names; Wakame, Kombu, Hiziki and Nori are all popular varieties in the UK, but despite having 2000 miles of coastline, we have very little history of using any of our 700 native species, as food. One that has been used however, especially in Wales, is Lava, a flat red/brown seaweed that that turns green when cooked (as they all do) and also goes by the name, Nori. Now I live in London and my trips to the coast are depressingly few, so the Nori sheets I used for this came from a local shop, but had I been sufficiently purist, it would have been relatively easy to harvest my own. The flowers I used were all in season in July when I took this photo; Nasturtium, Hairbell, Day Lily, Evening Primrose and Japanese Rose…basically any petals, or earlier in the year, leaves, that you can positively ID as edible, or a mix of wild and domestic so long a they have good colours and will help create something stunning to look at as well as eat. So, for the specifics on cooking the rice and making these rolls, let’s go over to my friend Mark Williams from Osaka….ok, actually he’s from Scotland, but he know’s his wild sushi…http://www.gallowaywildfoods.com/wild-sushi-rolls/

Plenty of our edible seaweed can be used to make delicious crisps but so far, Sugar Kelp is the best I’ve tried. It grows all round the country, in huge, sometimes 5-6 metre long ribbons and is easy to identify with a distinctive “wavy skirt” running along both sides. Many of our seaweeds are best deep fried outdoors; they have a tendency to explode as the ninety something percent of water that they contain, leaves at high speed the second they hit the hot oil, not something you want to be too close too. It’s possible to cook Sugar Kelp without such drama if you use a cross between deep and shallow frying, perhaps 2 inches of oil in a saucepan. About 30 seconds is a rough guide but it pays to experiment with single pieces to start with and overcooked seaweed tastes quite bitter and chalky, unlike the delicious sweet/savoury flavour you can expect from perfectly cooked Sugar Kelp. I prefer to cook mine fresh or rehydrate it in some warm water for a minute, but be sure to remove any excess water before it hits the pan. The Furikake I sprinkled over my crisps, are my “go to” addition to numerous dishes at the moment, a mix of seaweeds, sesame and sometimes dried fish. 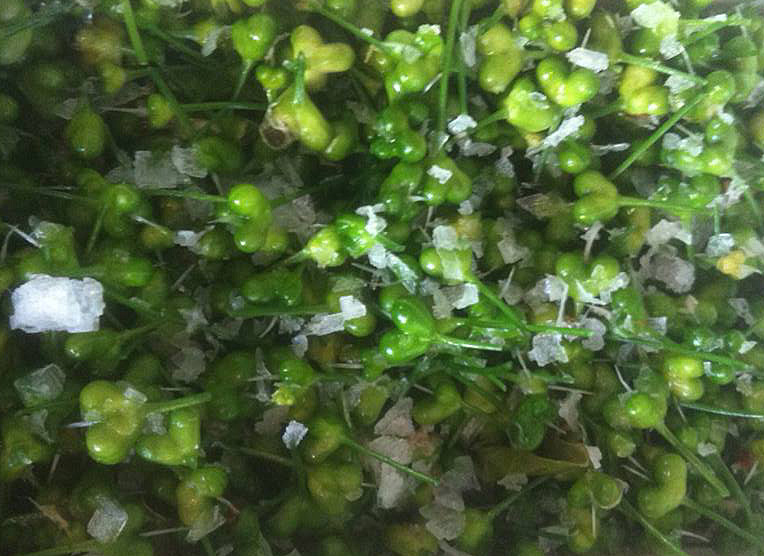 Some plants give us a variety of crops spread across the year, Spring leaves are followed by Summer or Autumn fruits, sweet flowers give way to delicious edible roots and so the process goes on. Not so with Wild Garlic aka Ransoms (or as the say stateside “Ramps”) which pretty much give up all their gifts in a period of 2-3 months and provide the forager with five different crops. With edible leaves, shoots, bulbs and flowers, the last visible crop this wonderful plant has to offer, are its small, 3 lobed seed heads that come into view as the flowers drop off. If you can safely ID this plant (just use your nose) and are sure you are not collecting poisonous Bluebells or some other toxic member of the Lily family, then a real wild treat awaits you. Gather as many green seed heads as you can bring yourself to (slow and fiddly work, a few hundred should do), then snip off most of the stems leaving just the three small balls of the seed behind. Put them in a bowl or jar and rub with salt, leaving them like this for about three weeks before pickling in a light vinegar with some sugar…hey presto, Wild Garlic Capers…the only problem I have with these is when I have to share them with other people. 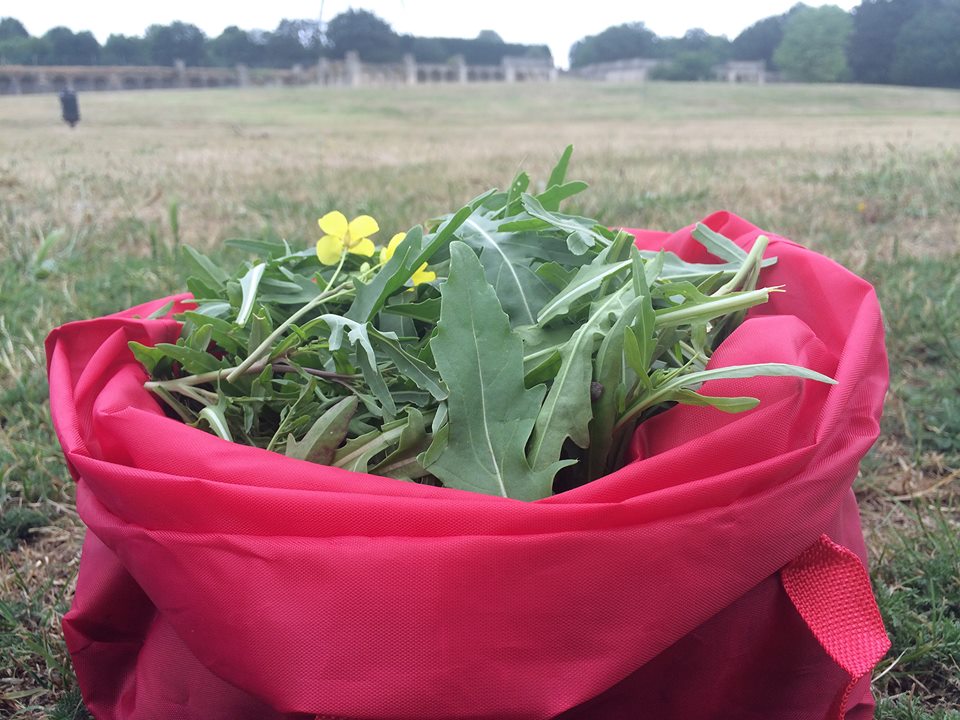 A trip to South London’s Crystal Palace Park inspired this part of my Bento Box. Early July, a hot, sunny day and some huge patches of “Wild” Rocket were there to meet me. I headed home with a big bag full and ate some in a salad for my lunch (delicious), drank some blended in a smoothie (disgusting) and with what was left over I made some Wild Rocket Humous and something very similar to Wasabi, traditionally made with the root of Japanese Horseradish, a member of the Cabbage/Brassica family, as is Rocket. To make my version, I chopped then blended the Rocket leaves and then mixed with a much smaller quantity of tinned chick peas, with the intention of getting something more resembling a smooth paste than just a pesto, then squashed and rolled it into small balls to get the right look too. It slightly lacked that eye watering delight that a proper Wasabi can create as its vapour wander up the sinuses and out through the ears, but the taste was quite fiery and a great wild substitute. 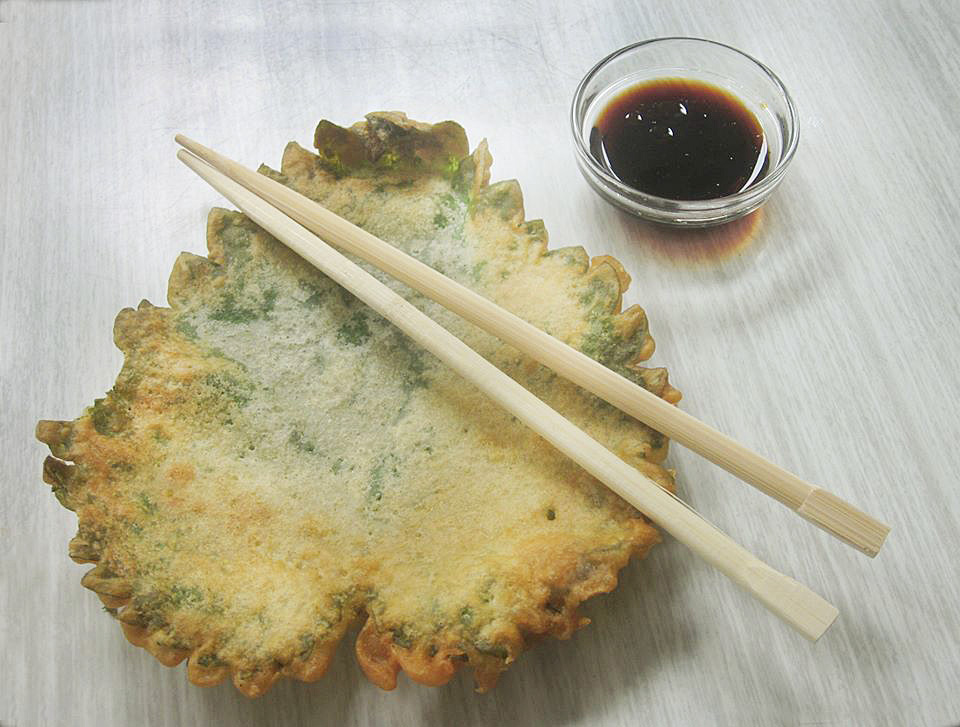 Is there anything that can’t benefit from being turned into Tempura? Well, ice-cream maybe but I’d give it a go if I thought it would work. One of my all time favourite wild dishes is Tempura Stinging Nettles, the flavour is great but better still, if done with a degree of care, the leaves retain their shape perfectly and become a wonderful edible plate on which to serve something else, a salad, some seaweed or whatever you fancy. Hogweed (not Giant Hogweed, that’s the massive, quite dangerous version), a much under utilised member of the Carrot family, not only has some very poisonous lookalikes but requires careful handling and picking, containing a sap that causes contact dermatitis in some people…SO, be 100% certain of your ID and once you are sure, avoid gathering it with bare hands on a sunny day or you may find yourself with some unpleasant burns. I used a mix of unopened flower buds (also great steamed and reminiscent of a tiny broccoli head) and a few of the newly opened flowers, individually separated from the much larger, umbrella like sprays in which they grow. Tempura batter is a mix of cold fizzy water, plain flour and corn flour, although I used a ready mixed powder and also added some salt to it (vital in my opinion). I prefer a thinnish, runny mixture that I whip lots of air into with a fork and only gives the lucky recipient, a thin, lump free coating, but that’s just my preference. Fry in a couple of inches of hot vegetable or rapeseed oil for about a minute, then serve with a splash of soy..heaven on a plate, Ok, heaven in a box. 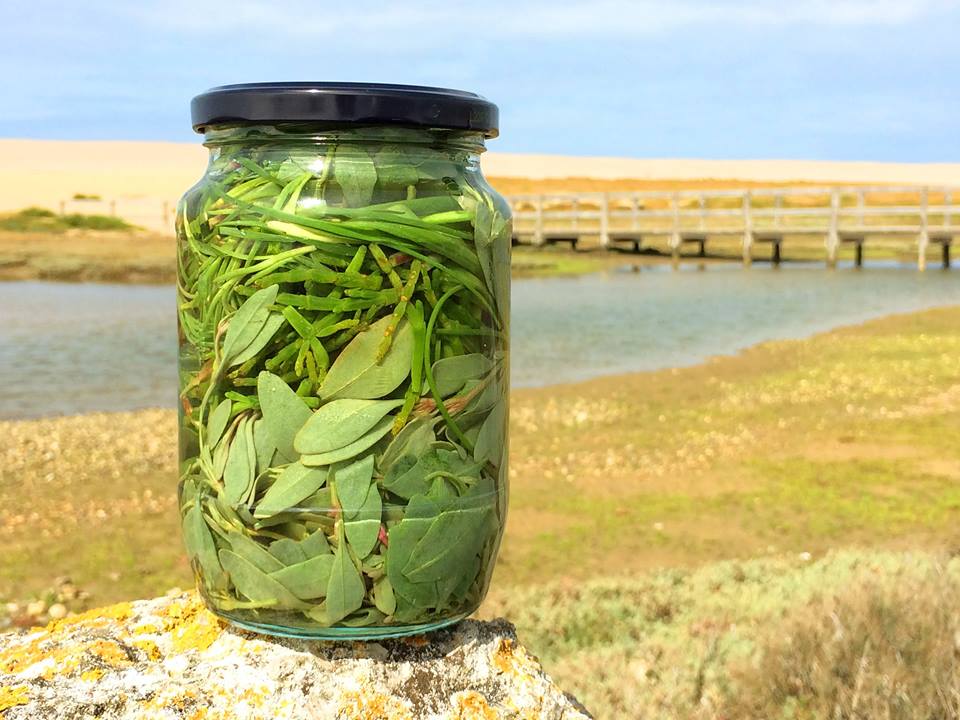 Gathered by the sea, washed quickly in fresh water, assembled in the van, photographed on the spot. The plants that went into my jar were…Marsh Samphire, (aka Glasswort) and Sea Purslane, both in the “wild spinach” family. Like many coastal plants, they’ve modified themselves to become more succulent than their inland relatives and as such, more resistant to the harsh coastal conditions, giving them a sweet, salty crunch, which makes them ideal for preserving. To these I added some Sea Aster (a coastal relative of the daisy), some Shrubby Sea Blite (a plant described as “nationally scarce but locally abundant”), Sea Plantain and my absolute favourite, Sea Arrow Grass, also known as Coriander Grass. I then added a 50/50 mix of rice wine vinegar and water and a few sachets of brown sugar that I “borrowed” from the nearby café. Ready to eat in a matter of days, more a Japanese style, light pickle than a traditional English, pickled to death, type affair.

Next post: A SHORT(ISH) FILM ABOUT FORAGING IN LONDON